The Copy Number Variant (CNV) module of SFARI Gene is a comprehensive, up-to-date collection of all known CNVs that have been associated with ASD. CNVs are segments of DNA, typically greater than 1,000 basepairs in length, that vary in number from person to person. These submicroscopic deletions and duplications are increasingly thought to be involved in the pathogenesis of a wide range of human diseases, including neuropsychiatric disorders such as ASD. For this reason, the CNV module of SFARI Gene serves as a valuable resource for the ASD research community.

The data contained in the CNV module is curated from the latest peer-reviewed research. MindSpec researchers systematically search, collect, and extract information on CNVs from autism case cohorts and, when available, unaffected control cohorts. CNVs in the module are organized based on the locus (chromosomal region or band) in which they were observed in each annotated report.

All of the CNVs identified in the SFARI Gene database can be viewed using the new Copy Number Variant (CNV) Scrubber tool. The table below the CNV Scrubber contains the name of every CNV in the database, along with several columns of the most pertinent information. The dynamic Quick Search tool at the top of the table can be used to immediately filter the table’s contents to help find specific information about a certain CNV.

Data from the module is also accessible via the Human Gene module. If a CNV has been observed in a particular gene, it can be found on the table on a gene’s summary page under the Associated CNVs column.

Copy Number Variant (CNV) Scrubber
The CNV Scrubber provides users with a quantitative look at copy number variants that occur in every chromosome. The scrubber shows the number of CNVs found at a particular locus, the number of reports curated, and whether a CNV is primarily caused by deletion or duplication. 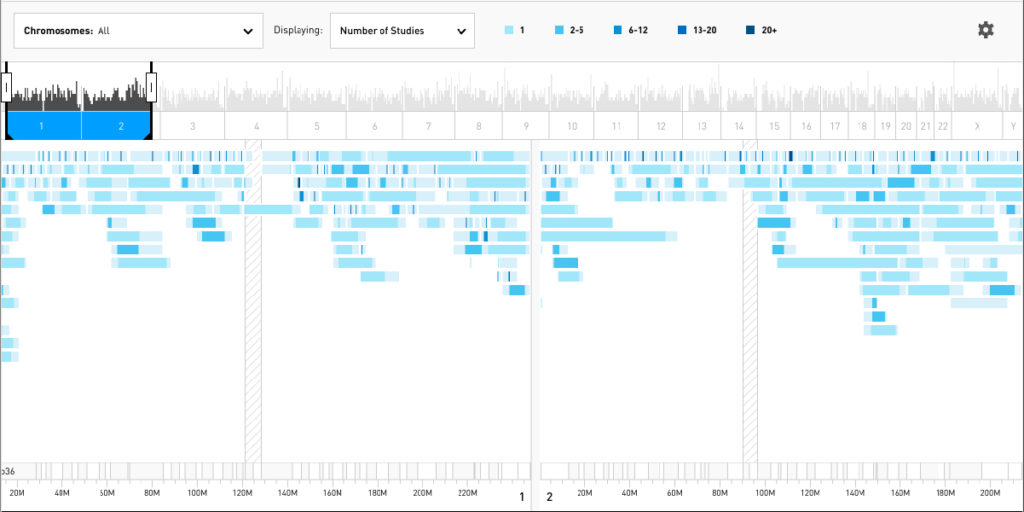 The data on CNVs are presented along two parallel axes. The sliding scrubber on top uses vertical bars to show the number of CNVs at each location in every chromosome along the human genome, while the larger window below uses horizontal bars to illustrate the number of overlapping CNVs at every locus. This dual functionality gives users both a broad overview of the most common genetic locations of CNVs and a more in-depth look at the size and frequency of individual CNVs and whether they are attributed to duplication or deletion.

When users hover over a CNV, they will see a brief summary of the CNV including its name. When a CNV is selected, users are taken to a CNV summary page where they can find more in-depth information about the CNV, the reports implicating it to ASD, observed instances in related animal models, and more.

Color filters can be applied to the data viewed with CNV Scrubber to provide additional information about the information presented. The data can be filtered by:

Deletion vs. duplication
Copy number variation is caused by either the duplication or deletion of a gene segment within a given chromosome. In many cases, however, deletions and duplications can be found at the same locus. The CNV Scrubber uses a color gradient to represent the instances in which a CNV has been attributed to deletion, duplication or both.

Number of studies
The data available in the CNV Scrubber can be viewed by the number of studies that identify each CNV. This feature will help users determine, at a glance, the relative frequency of ASD-implicated CNVs found in a particular location.

Number of CNVs
Users can also filter their results to highlight the number of individual CNVs found at each location. As the number of CNVs identified in a study can vary greatly, this view gives users an accurate representation of the individual CNVs that have been catalogued in the database, regardless of how frequently or infrequently they’ve been cited in published research.

The contents of the CNV module have been updated to eliminate redundancies, better visualize the data, and ensure the latest information is available to researchers, and the improved interface allows users to see what genes are within a CNV’s range. The newest features of the CNV module include:

Single CNV Visualization
Every CNV summary page in the module features a visualization of the chromosomal range in which the CNV is known to occur. This new single CNV visualization tool maps the CNV along the corresponding cytogenetic band, measuring its length and location in terms of basepairs. It shows users the minimum and maximum range in which the CNV has been identified, the median starting and end points, and the median length. Buttons at the top of the tool allow users to view either data found in case populations or data found in control populations.

Data from the CNV module can be found by using the full site search in the top navigation or the Quick Search or Advanced Search tools. The Quick Search tool below the CNV Scrubber can be used to immediately filter the content of the table. The table is dynamic, updating the information displayed as the user types. The Advanced Search tool, located on the Tools page of SFARI Gene, searches the entirety of the database, and provides additional filtering options to further refine the information found in the search. 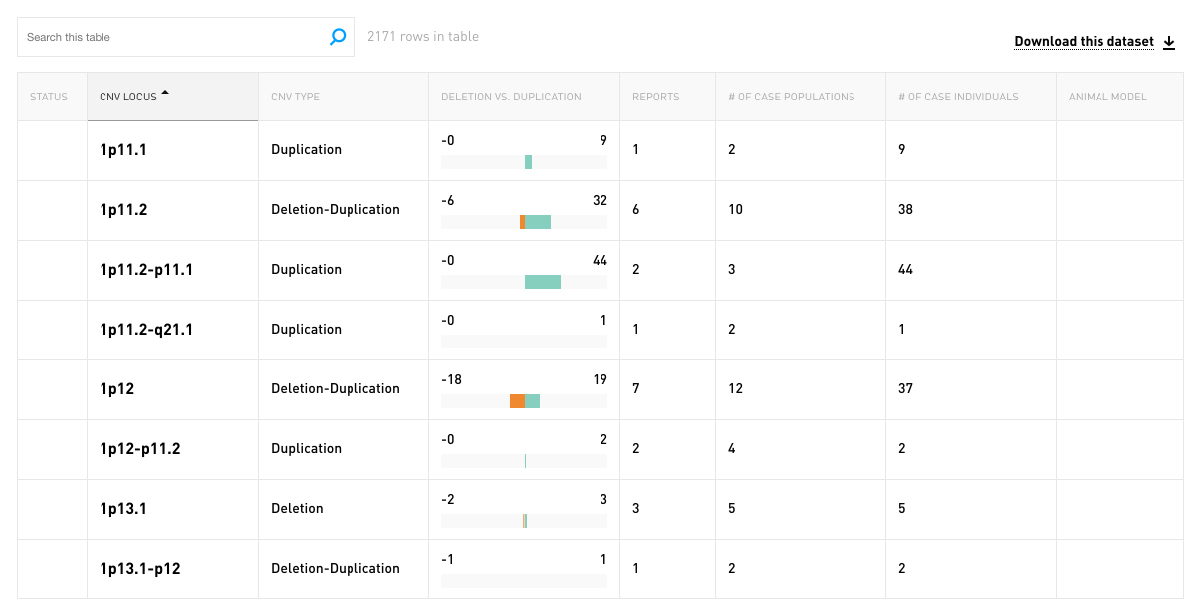 Each CNV curated into the module has a dedicated entry summary page that contains the following information:

In the tabs below, users can find additional information on the individual reports linking a CNV to ASD, a breakdown of which studies observed populations versus those that observed individuals, and associated animal models.

Populations
Each population (or cohort) in the CNV module dataset is assigned a name (or cohort ID) based on information from the initial report. Cohort names consist of the name of the first author listed in the report, the year the report in which the cohort is described was published, the disease being investigated, whether the cohort is a discovery cohort or a replication cohort, and whether the cohort consists of cases (i.e., individuals diagnosed with the disease of interest) or controls.

While all reports in the database feature a discovery case cohort, only a few also describe a replication case cohort, in which the authors attempt to replicate their findings in the discovery cohort sample with a new population of cases.

For example, for the ASD discovery case cohort described in Pinto D 2010, the name of the cohort in the module would be: pinto_10_ASD_discovery_cases.

For the ASD replication control cohort described in Glessner JT 2009, the name of the cohort would be: glessner_09_ASD_replication_controls.

When available, the following information on both case and control cohorts is extracted and presented in the CNV module as population data:

Users can also expand the cohort details to reveal the following information:

Individuals
Many published reports in which copy number variants have been identified include information on the individuals (also referred to as “cases” or “probands”) with autism. When provided, this information is curated and presented in the individual data section.

For example, for patient 5335_3 from the ASD discovery case cohort described in Pinto D 2010, the name of the individual in the module would be:
pinto_10_ASD_discovery_cases-case5335_3.

When available, the following information is extracted and presented in the CNV module as data from individual reports:

Users can expand the report details to reveal:

In the expanded view, users can also find information about:

CNV Inheritance
A CNV can arise de novo or be inherited through either the maternal or paternal chromosomes. (In some cases, a CNV can be inherited from both parents.) A de novo CNV spontaneously arises in an individual and is not transmitted from either parent, and there is considerable interest in the importance of de novo CNVs as a significant genetic cause for ASD, especially in simplex families. However, both maternally and paternally inherited CNVs are also believed to confer varying degrees of pathogenic risk. If the origin of a CNV has not been ascertained, then its inheritance is classified in the module as “Unknown.”

Family Profile
In many cases, families with individuals who have autism are categorized as either simplex or multiplex. In a simplex family, the proband identified in a CNV report is the only sibling in that family with ASD. (Simplex cases may also be referred to as sporadic cases in some scientific literature.) In a multiplex family, there is at least one sibling with autism in the proband’s family in addition to the individual identified in a CNV report. When such information is provided, the Family Profile is listed as either Simplex or Multiplex. This information is essential in understanding how closely a given CNV co-segregates with the disorder.

3.7   Connections to Other SFARI Gene Modules

The information in the CNV module is continuously updated as our dedicated research team curates new genetic information into the database. For the most up-to-date statistics, see the Statistics section of the About CNV page: