The Human Gene module is an active collection of candidate genes identified through genetic association studies, genes linked to syndromic autism, and genes in which rare mutations have been found that are linked to autism.

The Human Gene module of SFARI Gene serves as a comprehensive, up-to-date reference for all known human genes associated with autism spectrum disorders (ASD). It is the central component of SFARI Gene. The data contained within the other modules of SFARI Gene (Animal Models, Protein Interaction, Gene Scoring, and Copy Number Variant) are seamlessly integrated into the Human Gene module. When a user selects a gene, they will be taken to a gene summary page that features all of the genetic information from the Human Gene module, along with any related data from other modules. This additional information can be found under the subsequent tabs on the gene summary page, and users can further explore data in other modules by clicking on the information contained in these tabs.

All genes contained in the Human Gene module can be viewed using the Human Genome Scrubber, which can be seen below: 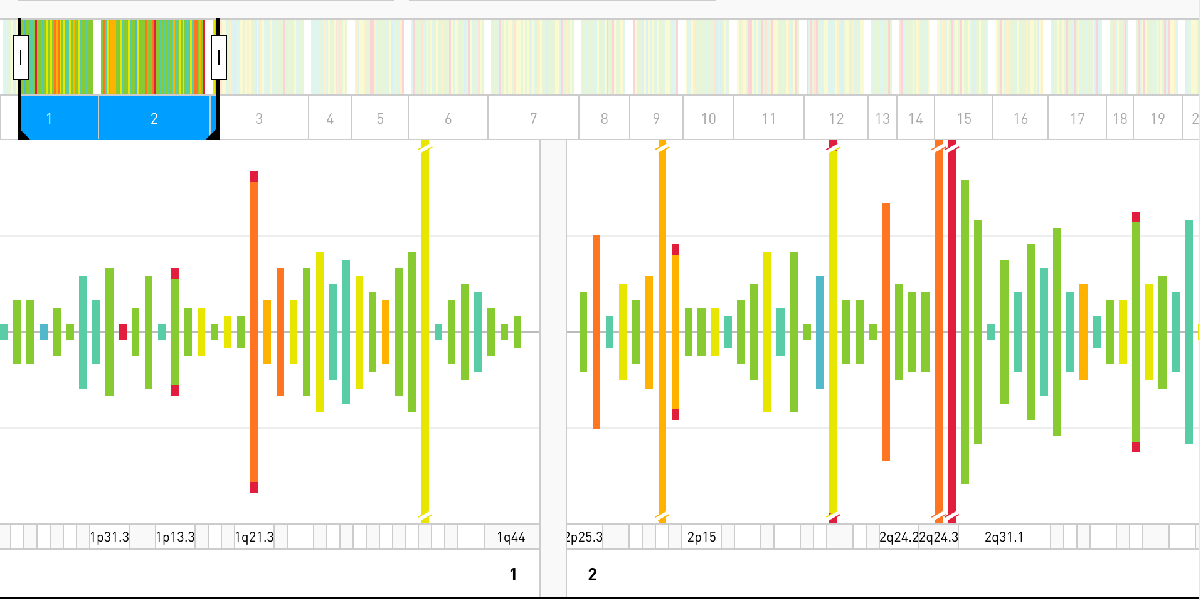 The scrubber’s viewable region can be expanded or contracted to view large portions of the genome or focus in on a specific chromosomal location. Genes are denoted by vertical bars along a horizontal axis displaying the 24 chromosomes in the human genome. The height of the bars indicates the number of individual reports linking a gene to ASD, and color is used to signify the assigned Gene Score.

The genetic information presented can be filtered by gene score or by chromosome, and an overlay can be added to the data to highlight the number of autism-focused studies directly implicating a particular gene.When users hover over a gene, they can see the exact number of curated reports, along with the assigned gene score indicating the strength of the evidence linking it to ASD. When a gene is selected, users will find detailed genetic information curated from the reports, such as the gene’s molecular function, the number of rare or common variants of the gene, and any associated syndromes or disorders.

In addition to the new Human Genome Scrubber data visualization tool detailed above, the interactome featured in the Human Gene module has been enhanced. The interactome found in the tabs on every gene summary page is now interactive and more robust than in previous iterations of SFARI Gene. Filters can now be used to focus on specific types of protein interactions occurring within each gene.

In the Human Gene module, the Quick Search function at the top of the table can be used to help quickly and effectively filter the data. The table results will automatically update based on the user’s query, helping to narrow down the scope of information presented in the table.

Each gene in the Human Gene module has a dedicated entry summary page that contains the following information:

In the tabs below the gene summary, users can find additional information on the individual reports linking a gene to ASD, rare and common variants, the gene score, associated CNVs, associated animal models, and identified protein interactions.

In the Variants tab, you’ll see detailed tables of the rare (first table) and common (second table) variants for that particular gene. Not all genes will have rare and/or common variants.

Under the Rare Variants header, you’ll see the following columns of information about each variant: Status, Allele Change, Residue Change, Variant Type, Inheritance Pattern, Parental Transmission, Family Type, and the first author and year of the reference for the scientific publication containing that variant. This last column also includes a link to the PubMed abstract for that publication.

Under the Common Variants header, you’ll see the following columns of information about each variant: Status, Allele Change, Residue Change, Variant Type, Inheritance Pattern, Parental Transmission, Family Type, and the first author and year of the reference for the scientific publication containing that variant. (Note: these columns are TBD.)

On the gene summary page, users can also learn more about the rationale behind assigning a particular score to the gene. The criteria met by the gene to warrant its grade can be found on the summary page, and if a gene’s score has changed in any way since its initial inclusion in the database, users can use the Scoring History tab to see how and why it’s score was altered.

2.8   Connections to Other SFARI Gene Modules

The information in the Human Gene module is continuously updated as our dedicated research team curates new genetic information into the database. For the most up-to-date statistics, see the Statistics section of the About Human Gene page.